When rock-and-roll legend Little Richard was growing up in Macon, Georgia, his Pleasant Hill neighborhood was an African-American community of modest houses and vibrant local life. But the construction of Interstate 75 in the 1960s divided the neighborhood. Later, when the Georgia Department of Transportation (Georgia DOT) needed to make improvements to the I-16/I-75 Interchange, they saw an opportunity to work with communities to address impacts to their neighborhood. While moving forward with the improvements to this interchange, Georgia DOT devoted time and effort to mitigating project impacts, including moving historic homes, building parks, adding pedestrian walkways, and documenting the local history. Traffic impacts have long demonstrated the need to improve this interchange. Beginning in 2000, Georgia DOT began meeting with Pleasant Hill residents to gather their input as the project developed.

The construction of I-75 predates the National Environmental Protection Act (NEPA), enacted in 1970, the National Historic Preservation Act (NHPA), enacted 1966 and Executive Order 12898 (Environmental Justice). As a result, project planning and development of I-75 did not consider environmental and historic preservation issues. The current improvements to I-75 and I-16 come at a time when project development is guided by these environmental laws; thus operational safety along with community concerns are part of the equation.

The I-75/I-16 interchange improvement project has several serious constraints, including its location at important cultural sites. This became the genesis for Georgia DOT’s work with federal, local and state partners to address the potential impacts to the Pleasant Hill neighborhood, a historic African-American district listed on the National Register of Historic Places with housing dating from the 1870s.

Prior to the interstate construction which began in 1965, Pleasant Hill was a self-sustaining, vibrant community where many African American professionals called home and raised their families. Pleasant Hill, developed in the late 19th century, is the first neighborhood in Macon planned, constructed and inhabited by a rising black middle class. It was home to accomplished musicians, such as Richard Penniman, best known as Little Richard, as well as doctors, legislators, and teachers, which helped the community thrive.

Georgia DOT engaged with the community early on, setting up a multi-year series of public meetings and citizen advisory groups in an effort to ensure residents had the opportunity to learn about the project, voice concerns, and participate in the solutions, including mitigation strategies.

Georgia DOT gained the trust of residents by being present and listening, according to Peter Givens, President of the Pleasant Hill Neighborhood Improvement Group (PHNIG), in a video posted to the GDOT’s YouTube site. 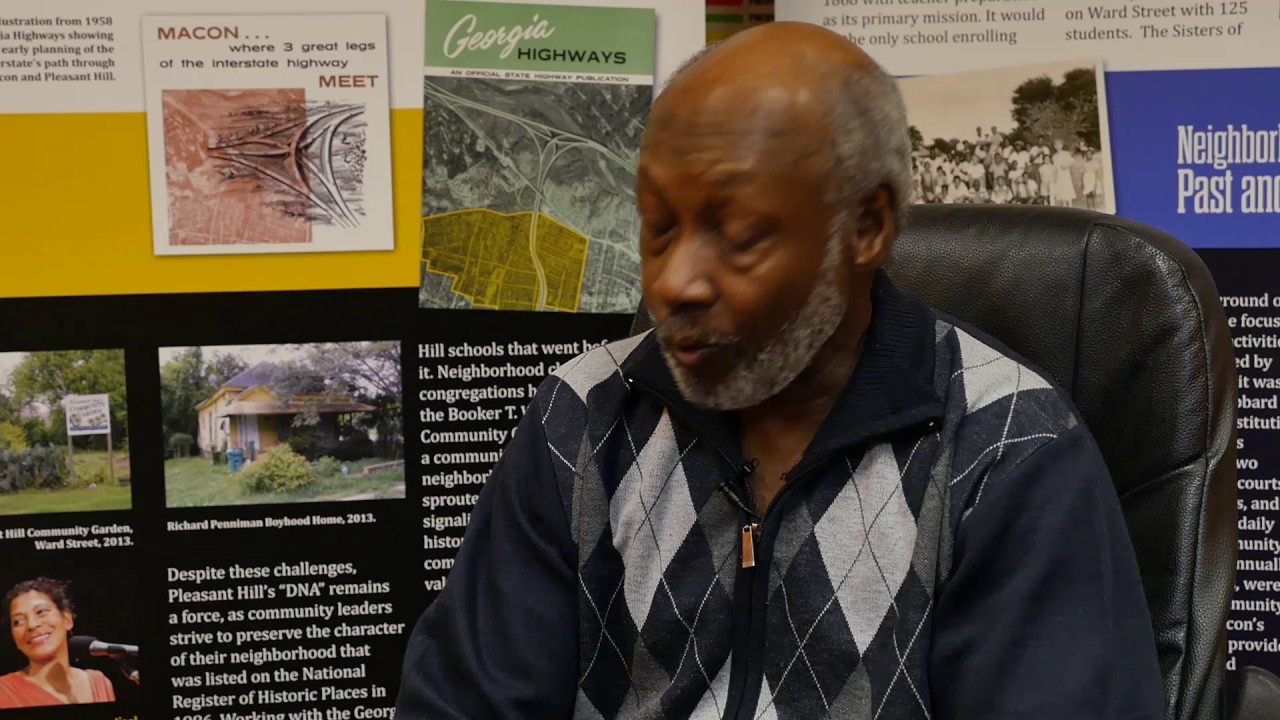 The fact that the agency was willing to do that was impressive, Givens said, recalling that the citizens’ group wanted “to talk about how we can work together to make things better.”

In May 2011, the project team and the community developed a comprehensive mitigation plan, detailing the work to be done and the anticipated schedules and timelines to implement the commitments. Two agreements emerged from this plan. Section 106 of the NHPA requires the mitigation of adverse effects to historic properties; the implementing agency and the SHPO traditionally sign a Memorandum of Agreement (MOA). Unique to this project the Georgia DOT entered into a second MOA with the community, signed by the president of the Pleasant Hill Neighborhood Improvement Group (PHNIG). A first for Georgia DOT, this agreement exemplified their commitment to the community and the mitigation plan.

Mitigation efforts include the creation of a traveling exhibit; oral and video history of the community; a virtual tour through GIS; an update of the National Register of Historic Places Nomination for Pleasant Hill with any new information acquired during this effort. In addition to the recordation of the community’s history, mitigation efforts also include leaving an imprint other than the interstate on this community. These efforts include the rehabilitation of the Little Richard house according to the Secretary of Interior Standards; a pedestrian path combined with a neighborhood heritage tour with information kiosks and noise walls along I-75 in a linear park that will incorporate specific designs to celebrate accomplishments of the community. A blighted and crime ridden area existed adjacent to the interstate. At the urging of the community, the project acquired additional homes to accommodate this linear park. Additional improvements include replacing the David Lucas pedestrian bridge, transforming an existing open drainage ditch into a grass-covered culvert, and streetscaping (resurfacing and sidewalk rehabilitation) throughout the community.

According to the mitigation plan, 24 structures located within the historic district would be displaced by the interchange project. Owners were offered a number of options, including moving their house to a new lot within the neighborhood, having their house torn down and a new one built in a new location, or selling their property.

To further cement the involvement of and benefit to the community, Georgia DOT worked with the PHNIG and Macon-Bibb County Community Enhancement Authority (CEA) – a local community entity that promotes community enhancement and economic development throughout Macon-Bibb County – to facilitate optimal mitigation success. This effort focused on providing training to members of the community in building and relocating homes and ensured economic development was a by-product of the projects. The Macon Bibb CEA selected seven vacant lots and residential structures for relocation and rehabilitation in Pleasant Hill. In addition, CEA agreed to build 17 new residential structures throughout the community with the goal of ensuring that a total of 24 homes were relocated, rehabilitated or newly built. These houses will be compatible with the context of the historic community and will ensure that the cultural heritage of Pleasant Hill is preserved. Georgia DOT also will relocate and rehabilitate the Little Richard House. Relocations began in early 2017.

As part of the overall mitigation efforts, GDOT arranged for the relocation of the Penniman House, also known as the “Little Richard House.” Little Richard, who was born in 1932, spent part of his childhood in the house and in Pleasant Hill. Acquired by GDOT in 2013 and moved to its new location next to Jefferson Long Park on the west side of I-75 on April 25, 2017, the house will be renovated and preserved as a neighborhood resource center and will be owned and operated by the City of Macon.

The unique nature of this project offers the opportunity for many lessons learned. One of the primary lessons is the importance of engaging and including the community in decisions, often and early. Georgia DOT invited the community to be signatories on the MOA – demonstrating a willingness to allow their voices to be heard; allowing their involvement in decisions about the future of their community, and ensuring the preservation of the historic value and culture of Pleasant Hill.

Another critical lesson for DOTs across the nation interested in participating in such mitigation plans, the need to have very clearly defined expectations and responsibilities. Departments of transportation must ensure that cost estimates for mitigation plans are clearly defined, carefully considered and vetted and that schedules are tied to those mitigation activities.

A third lesson learned is that a commitment based on cost estimates is time sensitive as the proposal to relocate historic homes. An estimate prepared by a house mover in 2010 indicated that the houses could be moved and rehabilitated for approximately $70,000 each. A 2015 bid to move and rehabilitate four homes resulted in an average cost of $600,000 per house. A close review of this bid suggested that the cost could be reduced to around $400,000 per home, still considerably higher that the initial estimate. The community and agencies reevaluated this commitment and agreed to a combination of new and rehabilitated housing.

GDOT is committed to working closely with communities affected by their projects. This commitment is clearly reflected in the Department’s mission:

The Georgia DOT is very proud of the mitigation work done on this project. The collaborative efforts and the beneficial dialogue have ensured the community’s needs are respected and preserved. The Department also made a pledge to keep the community informed and engaged as we move through the construction phase and that has been an ongoing effort.

More information is available from GDOT’s I-16/I-75 Interchange Project website and from the story map of Pleasant Hill produced for the project.